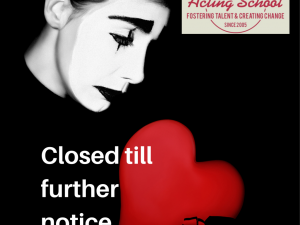 It’s with a heavy heart and the best intentions that I have taken the decision to shut Meladrama with immediate effect. It’s not been an easy decision – particularly because the schools are still open and furthermore our children and students across all classes have worked extremely hard on their comedy pieces. On top of which – I’m self employed and now facing a good 6-8 weeks without income. BUT I’ve been skint before so I know how to budget and my priority is and always has been the safety and emotional well being of our children. Many children can’t attend  tonight due to self isolation – meaning it would be a difficult final two weeks for those that can as they are all working in pairs or small groups.

We opened last night and it was a strange atmosphere with the children feeling pressure to be ready to film their pieces instead of performing as planned in 2 weeks.

I am also a staff member down due to self-isolation PLUS I only recovered from several months of ill health quite recently.

BUT the show will go on. I will make it up to all our students. I promise you that our next show will be the biggest and best we have ever done – something I will hopefully be able to start planning during the tedious hours we have ahead of us at home. Who knows – things could change and we may be in next week for the final two weeks but it’s unlikely. Every theatre has closed its doors and most TV shows and film sets have halted productions.

So I stand in solidarity with my showbiz pals and safe in the knowledge that we did our bit and put the vulnerable first.

I hope these difficult times teach us all to appreciate what we have – and to hold close the ones we love. We’re only here once and sometimes a reminder of what really matters isn’t a bad thing.

I’m going to clean the shed out, get lots of stuff ready for charity and do all the stuff that niggles away at my brain ….. all the stuff I put off.

I’m also going to spend time with my son, my partner and my dog without always having to rush off or think about something else I haven’t done or need to do for work. I’m going to help the elderly and retain a positive attitude.