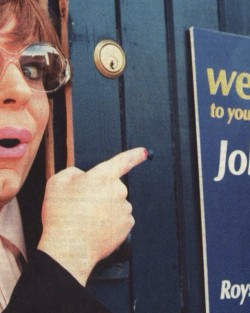 What is the current obsession with comedians lecturing us and telling us how to live our lives?  I don’t know about you but I go to see a comedy show to have a laugh.  Call me literal but if an event is billed as comedy, is endorsed by a comedy promoter and ‘stars’ a comedian I expect to have a bit of laugh.  Yes I want to be challenged in comedy too – my absolute fave comedians are Bill Hicks, Shappi Khorsandi and Russell Brand. Given a choice I would ban Michael McIntyre, Miranda and Sarah Millican from ever holding a microphone.

I went to see Ruby Wax in her new show called ‘Sane New World’ last night at Stockport Plaza.  I was excited to see her.  Having suffered with various bouts of depression since my early teenage years (caused by childhood trauma) I held Ruby in high esteem because of her tireless and exemplary work for the various mental health charities, and of course making it kinda ‘cool’ to be a little crazy.  Stephen Fry, Russell Brand – she’s the female version right? What’s not to love?

I had dragged my pal along to see her and even paid for both our tickets as I was almost orgasmic about hearing what she had to say. We parked our bums in the dress circle with our pop and choc choc and waited in anticipation.  Strangely we had leaflets to see Chubby Brown – my friend is a fan and told me one of his jokes.  That was the first (and only) laugh of the evening.

Cue pre-show music – oh wait……… There wasn’t any.  Just Ruby wondering aimlessly onto the stage and asking us to chat while she had her cuppa.  OK, go with it I thought.  Her first joke will be a killer.  Instead she opted for a ‘Miranda’ type slap stick comedy moment that involved her fake spilling her brew down herself.  Anything that reminds me of Miranda is going to get my back up to be honest.

Anyhow, she then preceded to wonder aloud why nobody had seen her last show – I felt guilty.  We all felt guilty, she mentioned it 3 times in total. We all felt deepening guilt.  Ruby then explained that totally ‘by accident’ she had become the poster girl for mental health, and it became clear as she toured her last show that audiences were all clearly struggling with life.  (I would argue that they were struggling with life AFTER spending 2 hrs in a theatre with her).  She was on a mission to save us all and explain how the brain works so that we would all be free from our misery. With pictures and animations she had drawn herself  (next time ask my 5 year old son to do them Ruby) she explained that she found life just ‘sssoooooo’ difficult.  I struggled to feel sorry for her and I LOVE a self effacing comic. Particularly a mentally ill one. Apparently after almost crashing her car she was so stressed she googled the man that knows the most about the brain – and he told her she needed to get a masters degree at Oxford, which she promptly did – as you do when you are spoilt.  She then translated everything she had found out on the masters course, with the same childish animations and even sat to read directly from a book about neurology at one point.  I had to nudge my Chubby Brown fan friend to wake him up and tell me another joke.  As a feminist this is not something I am proud of. Sorry. It’s just not ok.  My only excuse is that Ruby made me do it. We did get a few gags about being a student and a surprisingly cheap dig about the stereotypical lesbian, yawn.  Just before the interval we all had to join in with a short but guided meditation with Ruby.

BIG PROBLEM HERE! Speaking to a colleague during the interval about it we agreed this is dangerous.  Anyone could have taken over that meditation at any point.  As a drama practitioner I am often very tempted to do similar meditations and relaxations at the start of sessions however I don’t.  Because I am NOT trained to do it.  It’s not safe as I do not know each and every persons emotional history, mental and physical health.  This didn’t stop Ruby.  She needed to ground herself and we all had to join in, well apart from another pal I know who almost had a panic attack and my ‘comedy’ mate who got a huge attack of the giggles.  Next it was the interval and we were told not to bother coming back in if we were having an alcoholic drink,  not a problem Ruby.  Anything you say Ruby! Jump? How high Ruby?

A few left during the interval.  Not us.  I was determined to ask her a question.  What can I say?  My training as a Butlins Redcoat means that whenever I see a microphone I have to speak into it, none stop until ultimately I make people laugh and therefore happy.  Ruby was never a Redcoat.  Next we had to suffer 30 mins of what can only be described as a huge enormous self help group but with Ruby as the very grumpy facilitator. She reminded me of the character Pauline in League of Gentleman.   Pauline is a ‘restart’ officer and has no sympathy or compassion for the ‘dole dossers’ in her group.  Ruby was very similar telling one women it was impossible to have 5 siblings that all had mental health issues “hey I am not saying you’re lying but it can’t be true” and another she berated for spending too much money at The Priory.  The rest of the ‘questions’ were all veiled adverts raising publicity for the various mental health charities across Greater Manchester.

Right Ruby – I am ready for you I thought.  My turn, my question.  I wanted to know about tortured creative souls.  She’d just said the best visual art she had seen was by people that had been sectioned.  I wanted to know if we got better – did we stop being funny and creative?  I explained some of my best work as an actor and writer had been when I had been at my lowest ebbs.  She snapped back “have you bi -polar?” No Ruby – just bouts of depression all my life.  “Impossible” she told me “If you had depression you would be unable to get off the floor……… (She rather aggressively acted this bit out)……you would be unable to do ANYTHING”.  I agreed (I was too scared to do much else), and said that perhaps yes, maybe I just get more writing done because I am unable to get out of my PJ’s or leave the house.

It was a real shame, as I really wanted to know from an Oxford graduate, a world famous female comic, the poster girl for mental health how we balance comedy and tragedy. Why many of the worlds best writers, comedians, artists, film makers, musicians and actors have all suffered with mental health and mental illness from drug and alcohol addiction?  I want to know why my best actors are the ones that have suffered childhood trauma, are in care, been in the care system or are known to Child and Adolescent Mental Health Services (CAHMS).  She couldn’t tell me and didn’t want to explain it.   It was easier to dismiss me because I was not bi-polar.  However her act started saying this was a show for everyone.  Everyone who felt overwhelmed by pressure, stress and pain. This show was for ‘us’ apparently.  I’d argue that the show was part of Ruby’s therapy.  Theatre at its worst.  Self obsessed, with no real gratitude, responsibility or appreciation of the people that are paying to watch her and leaving their comfortable settees and lives to listen to her.

Ruby is unable to make me laugh.  She is no longer a comedian but an after dinner  ‘speaker’ whom is apparently an ‘expert’ in mental health. But she couldn’t or wouldn’t even explain the correlation between mental illness and unique talent and creativity.

I expect more.  She owes us more.  Next time I want to laugh I’ll be going down the Frog and Bucket for a Laughing Cows Comedy Night.  Glorious women, many of whom are challenging and informative about mental health…… but still know how to deliver a  joke and a punch line.

PS And don’t worry I will NOT be seeing Chubby Brown.